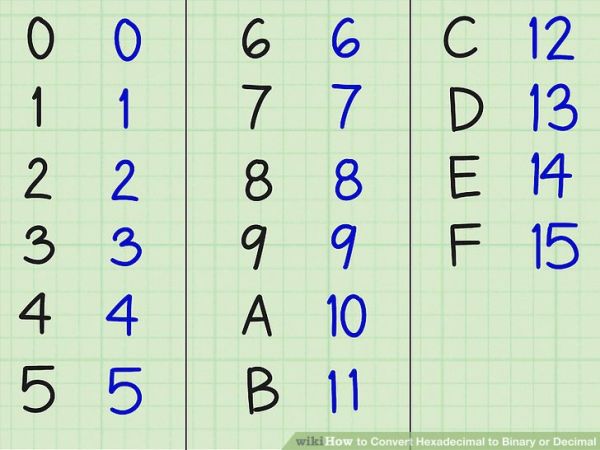 In the last artical, we discovered the sheer joy of counting in two – count ‘em, two! – new number systems: Binary and Hexadecimal.

But just being able to count is only the first step. To truly unlock the power of these number systems, you’ve got to be able to convert between them. In the event that you know how to use a search engine, then you already know how to type ‘convert 11001 to decimal.’ But, for quick conversions (and for the fun of it), it’s good to know how it all fits together.

A Note on Notation

Sometimes you might see people denote binary numbers starting with 0b, as in 0b11011101. This is just to clue you in to what kind of number you’re looking at. If you’re looking at a hex number, it might start with 0x as in 0xFCDE23.

If you remember, in the last article, we talked about how the digits in binary represent powers of two. Here’s a nice table to remind you:

So, when you come across a binary number, all you have to do is figure out the decimal value of each digit and add up the total! Let’s say you were converting the binary number 1101 0011.

That’s right! 1101 0011 in binary is equal to 211 in decimal. If you get confused about the value of a particular digit, one way to figure it out is to lay out a list of numbers on a piece of paper, starting from the right and going left. Start with 1, and double each next digit. One doubled is two, two doubled is four, four doubled is 8, etc.

And then take a look at the binary number you have. Anywhere there’s a zero, cross that number out!

Now you can add up whatever’s left.

To go from decimal to binary is a little harder to do. There are a couple of different ways to do it. I’ll give you both ways, and you can decide if there’s one that you like better.

I personally like this method better. It fits better with my brain. This version works well if you can remember the powers of two pretty well. Keep in mind that we’ll be filling in the binary digits from left (biggest) to right (smallest). I’ll give you a step-by-step guide, and pair it with an example. It works like this:

Does this match what we had in the section above? Yes! Success!

If this way doesn’t seem like it makes much sense, that’s totally fine. There’s one more way that doesn’t require you to remember the powers of 2.

The Other Way: Division

For this method, we’re filling in binary digits from right (smallest) to left (biggest). We’ll use 211 again. For each of these calculations, we’ll be dividing by 2 (floor division with a remainder). Be sure to keep track of the result value and the remainder for each one. The remainder represents the binary digit, and the result value is what we’ll use for the next round of calculations. Here we go:

All together (again, from right to left this time), our binary digits are:

And again we have SWEET SWEET VICTORY!

The really cool thing about this is that you already know how to do this one – you just don’t know it yet. It’s the same as the binary-to-decimal conversion. Each place has a value, and you add up all the digits! This time, though, each place is a power of 16. Honestly, for hexadecimal values longer than two digits, I always use a calculator or some other tool. I only remember the first three powers of 2: 16^0 = 1, 16^1 = 16, and 16^2 = 256. 256, you say! That is an easy number to remember. I’ll remember that for all time!

You’ll notice that two hex digits can include all of the values between 0 and 255. For those paying attention, you might recognize that 0 - 255 are also the values that can be shown in 8 binary digits – or one byte! This is useful because things like CSS commonly use hex digits when referring to values in that range. And now you have the power to convert #BADA55 as a hex color into RGB values:

So we know that #BADA55 is a color with quite a bit of green, medium-high amounts of red, and not a whole lot of blue.

Similarly, the process for converting decimal numbers to hexadecimal is the same as converting binary to decimal. Either of the binary methods can be used (subtraction or division).

We’ll do a division example just to confirm. Let’s convert 108 to hexadecimal to check our answer. Remember again that, since we’re doing the division method, we’ll have to write down the hex digits from right to left.

The nice thing about hexadecimal and binary is that 16 is a multiple of 2. In fact, 16 = 2^4. When converting hex to binary, you can essentially interchange each hex digit for 4 digits of binary and vice versa. How you convert that single digit of hex to 4 digits of binary is kind of up to you. When I do it, it comes down to a combination of a little memorization and converting through to decimal.

Soooo, combining everything, DB in hex is the same as 1101 1011. Did I plan for the binary number to be so symmetric? No. Will I claim credit for it? Absolutely.

Going the other way is exactly the opposite process. Once again, we’ll be converting 1101 1011 from binary to hex to check our work.

In the end, our final hex number ends up being DB. Just like we thought.

The True Power… of Powers

And that’s it! Go forth and conquer numbers everywhere. Amaze your friends by speaking to them in binary (or, possibly, get mocked for being a GIANT NERD 😁), streamline your CSS coding by eyeballing hex codes, and feel great about understanding how computers and math work just a little better. A lot of these conversion skills will carry over to other number systems: try looking up Octal and doing some conversions to and from that!

As always, the math can be a bit intimidating, so if you have any questions or don’t feel 100% confident in your number-fu, feel free to reach out to me and I’d be happy to show some more examples and help you get up to speed.