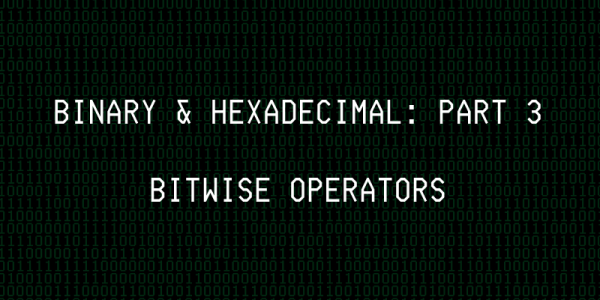 In the last binary/hex post, we worked through converting numbers between base 10 (decimal) numbers, base 2 (binary) numbers, and base 16 (hexadecimal) numbers. In this post, we’re introducing some new operations you can do to numbers now that you know that they are all secretly made up of ones and zeros.

Before we dive in to these operations, lets look at some terminology that’s used in Computer Science that you might see in other resources about this topic.

​Numbers (as well as any other data represented inside a computer) are made up of ones and zeros. After reading the previous two posts, you know that this format is called called binary. What you might not know is that each one of these ones or zeros is called a bit, and it is the smallest unit of information stored by a computer. Since there are only two states (1 or 0), computers can store this information as electrical or magnetic measurements: a bit can be either “on” (1) or “off” (0). Think of it like if you wanted to store a number by turning on and off a row of flashlights. The pattern of on and off would represent the overall data/number you’re trying to represent.

​For purely historical reasons, computers store bits in groups of 8. Each group of 8 bits is called a byte. This word is probably familiar even if you’ve never encountered binary before, because you’re probably familiar with terms like “megabyte”, “gigabyte”, “terabyte”, and beyond. Our phones are never shy about telling us when we’re running out of “Gee-Bees” (Gbs). I won’t go into the math behind the various prefixes, but it’s good to know where it comes from. Suffice it to say that we’ve standardized on processing things in bytes. Because bytes values can be between 0b00000000 and 0b11111111 (that is, 0 and 255), the number 256 might also look familiar in computery contexts. It’s a handy range to store data in.

​My personal favorite in the binary space is a nibble. A nibble is half of a byte, or 4 bits. Because of this, you’ll have nibbles with values between 0b0000 and 0b1111 (0-15). This is 16 possibilities. The particularly astute among you might recognize 16 possibilities as the exact number that can be stored in one hexadecimal digit. For this reason, converting one hex digit will yield you a nibble of binary. Chunking binary into 4 helps me keep track as I convert between binary and hex and back.

OK! Now that we know what a bit is, I can introduce bitwise operations. If you’re currently picturing a 1 and a 0 hanging out, both with giant grey beards, saying wise things… me too. You’re not alone.

But bitwise operations are more than just some wise old digits. They’re operations that can only computed by comparing the bits that make up two numbers. Let’s go through a few. If you’re familiar with logic/booleans at all, you’ll probably see some similarities to those.

NOT is also referred to as the complement. It’s a unary operation, which means you only do it to one number. It’s similar-ish to a negative sign in normal math.

If you’re working with decimal numbers, you can take a little shortcut. If you know the number of bits you’re using, the result of NOT-ing your number is max value of bits - your number.

Sometimes the shortcut helps. Sometimes it’s easier to convert everything to binary and flip the bits.

In some programming languages, you’ll see AND shown as a single & operator.

AND is really useful for doing a thing called “bit-masking” which is where you want to take a number and “mask off” certain digits so that only certain digits come “through the mask.”

For example, let’s say I’m going to ask you for a number and then I want to tell you if it has a 8’s place bit set in it. What I can do is “mask off” all of the other bits by blocking them, only letting the 8’s place bit through. Then I can check if it came through or not!

Clear as mud? This whole “getting your brain to switch back and forth from decimal to binary” thing is a skill that comes with practice. Try using AND to only show me the right-most two binary digits of 254. What is the result as a decimal number?1

One other neat thing you can do with AND is check if a number is even or odd! Think about the binary. Each digit is a power of 2, so a number can only be odd if it has a 1 in the far right digit: the ones place! Soooooo, in order to check if a number is odd, we can AND our number with 1!

683 AND 1 = 1, so 683 is odd! This may not seem very useful when doing it by hand—why not simply look at the number and say if it’s even!—but when you start to do things in programming, it’s a little harder to “just look at it.”

In some programming languages, this is represented by the | single vertical pipe symbol.

You can use this to “set” a particular bit in an unknown number. Let’s say that I’m going to ask you for a number, and regardless of what it is, I want to make sure I get the 4’s place bit set in my result. What I need to do is to OR your number with a 4!

This one is a little more complicated than the rest, but not scarily so. The XOR, also known as the “exclusive OR”, will output a 1 if either of the inputs is a 1, but not both. If both are 1 or both are 0, it will output 0. More simply, it outputs 0 when both inputs are the same and 1 if they’re different.

In some programming languages, the ^ symbol is used to represent XOR (a little confusingly since that’s the mathematical symbol for AND). However, XOR makes up for it in mathematical notation with the coolest math symbol: the ⊕ circled plus symbol. I think a huge opportunity was missed to call it a “plussircle.”

XOR is really useful for “toggling” a bit inside a number. In order to toggle a bit, changing it’s value no matter what it is, you XOR your number with a number with a 1 in the location you want to toggle:

One other extremely neat usage of XOR is encrypting things! The cool thing about XOR is that it undoes itself.

The most simple case (and what some programming languages do) is called a “logical shift,” which is where we just use 0 any time we need a new digit shifted in. Let’s see an example:

See how we keep the same relative pattern of the bits, but they get “shifted” over a certain amount? If we’re dealing with bytes, bits that go off the end get dropped, and every time we shift over, we have to bring in an additional 0 at the “input” end. However, you could also treat the binary number as having as many bits as it needs. In that case, numbers wouldn’t get dropped off the left side when we’re shifting left. We’d just get bigger and bigger. This would have the effect of multiplying or dividing by two. A left shift (<<) is equivalent to doubling your value, and a right shift (>>) is equivalent to halving (and rounding down!) your value.

There are other types of shifts that are less commonly used: “Arithmetic shift” and “circular shift”. I’ll mention them briefly for completeness, but don’t stress too hard about them.

In arithmetic shifts, the shift left is still the same. Zeros come in as needed. However, the right shift keeps the left-most bit the same even after a shift. This is because, sometimes, it’s useful to use that value as a “sign” bit which specifies if your number is negative or positive. In that case, the left-most bit is the sign-bit, and the other 7 bits in the byte represent the numerical value.

A circular shift is when you recycle the bit that drops off and use it to refill the bit coming in:

Bitwise operations have lots of neat little applications. You can use bits as flags specifying different unrelated options and turn them on or off as necessary. You can use shifting for CPU-quick doubling and halving, and you can use different masking and shifting techniques to focus on specific bits inside a number!

I’ll have more posts soon about how this new knowledge can be used in programming contexts.

There are also a couple side-topics like “Endianness,” which is just a fancy and intimidating way of saying that sometimes computers are programmed to expect the bits with the biggest value (Most Significant Bit: MSB) going left to right rather than right to left! For reference, all of the examples you’ve seen here are “big-endian,” with the MSB coming first. (Get it? big-endian = the “big end” first? I don’t know why they had to make it sound so scary.) We’ll talk about Endianness in a future article a little bit more.